The Mudéjar San Pablo Church (Iglesia de San Pablo) is the third most important Catholic Church in Saragossa city, after La Seo del Salvador and the Basilica of Our Lady of the Pilar, both buildings are situated in the Cathedrals Square. San Pablo’s Church is situated between San Pablo and San Blas streets, in the traditional San Pablo neighborhood, also known as “El Gancho” in the historical center. Not far of this church are the Roman Walls, Central Market and Pilar Square, the main tourist area of the city. It is worth mentioning that San Pablo’s Church together with La Seo, Aljaferia Palace and several other buildings form part of the Mudéjar Architecture of Aragón which was declared a World Heritage site by UNESCO in December 2001 as the most representative Mudéjar Architecture of Aragón. 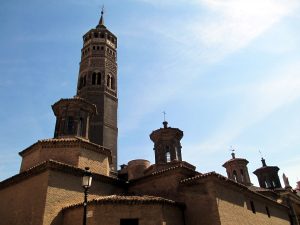 Built on the site where another temple stood previously, San Pablo’s Church was built with bricks in Mudéjar style between the late 13th and early 14th centuries. The first construction had a rectangular nave and the bell tower. Afte that, two lateral naves were added to the first nave at the end the 14th century. Moreover, it was several times remodeled and renovated between the 16th and 18th centuries and restored in the late 20th century.

A visit inside the church enables us to see a whole set of artworks, as well as its impressive high altar in polychromed wood by Damian Forment dating from 1515 (Gothic Renaissance), a jewel of art in Aragón. Inside visitors can also enjoy its interesting paintings, chapels, the choir and its magnificent organ with its original Gothic box which dates from the 15th century, although some of the pipes and other parts of the organ represent interventions in the 16th and 19th centuries.

The octagonal bell tower was built in the mid 14th century in Mudéjar style and decorated with bricks and glazed tiles, the seventh floor and the spire were added in the 17th century. The beautiful tower is 66 meters high and has seven floors which can be climbed stairs in order to reach the top, from where the visitors can enjoy a panoramic view of Saragossa. Due to that the tower was constructed before adding the two lateral naves to the building the tower’s base and its first floor are situated inside the church.

Mudéjar art is a style unique to Spain. Its forms, techniques and decoration of Aragonese Mudéjar art are characterized by the refined use of brick and glazed tiles in its architecture. People interested in Mudéjar art should not leave without visiting the elegant tower and go up the stairs to the seventh floor because San Pablo’s Church is worth visiting. The guided visit of San Pablo’s Church, cloister and tower costs 4 euros, we suggest that visitors book it in advance.

– Basílica del Pilar: The Pilar Cathedral (also called Basilica del Pilar) is the most famous icon of Saragossa. This church is placed in the centre of the city at Pilar Square (Plaza del Pilar), near the Ebro river and in the same square than “La Seo”.

– La Seo Cathedral: Salvador Cathedral (popularly, La Seo), in Zaragoza was declared a World of Heritage site by UNESCO as one of the most representative Mudéjar architecture of Aragón.

– La Aljafería: A must for all tourists that arrive in Saragossa is to visit the stunning Aljaferia Palace, which is really the most visited historic site in Saragossa. This medieval Islamic palace was built by Muslims on the banks of the river Ebro in the 11th century.

– Expo 2008 Zone:  In summer 2008, Saragossa received the international exposition Expo Zaragoza 2008, which was placed aside the shore of the Ebro River. Currently, the Expo Zone is open to all the visitors who want to see the area and enjoy its activities.