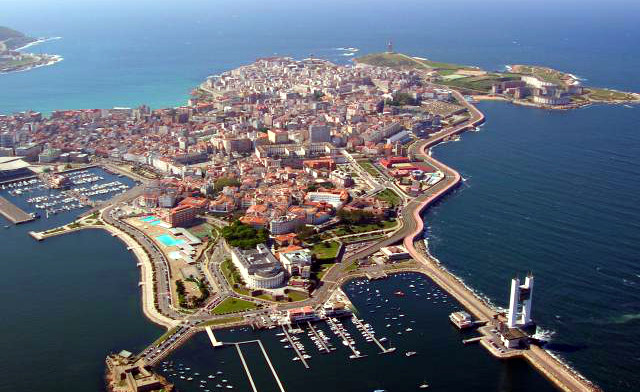 Situated on the north-west coast of Spain (Galicia) between the sheltered inlet of the Cantabrian Sea  (Ría da Coruña, Rías Altas ) and the Atlantic Ocean, its history goes back to the prehistoric Celtic times (Celtas), A Coruña (La Coruña) city covers the Coruña Peninsula and its isthmus. Moreover, the city has also been expanded and widened toward the mainland for years. In fact, with a population of about 250,000 it is one of the largest and most important cities in Galicia region.

A Coruña is not only popular with the tourists because its lighthouse, its new Outer Port (Puerto Exterior), its Inner Port (Puerto Interior), its tasty seafood, its great beaches but also its architecture, its museums, its parks, and above all, its promenade (Paseo Marítimo) which is 10 km. in length. Evidently, A Coruña has a lot of to offer visitors in the way of entertainment.

What to visit in A Coruña 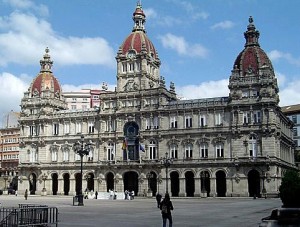 Taking a walk along the promenade (Paseo Maritimo) from east to north, on the right, people can see several cruise ships, many boats on the historic Inner Port of A Coruña on the Cantabrian Sea Ría da Coruña) and Sant Antón castle dates from 17th century to east of the isthmus. This important port welcomes tourists who arrive in A Coruña by sea. On the left some interesting buildings, parks and the renowned solana ( galleries or balconies of the buildings are closed with glasses or their facades cover in glasses ) from 19th century. In this area, the tourists can enjoy the old city strolling through its streets, they will find the landmark María Pita square, where is the City Hall a beautiful building from 18th century, in this area are some of the main restaurants and bares of the city; Saint George (San Jorge) church nearby; the San Agustin market; Romanesque Santa María del Campo church about 14th century; Santiago church the oldest Romanesque bulding in A Coruña dates from 12th century. Following the walk visitors will come across some interesting buildings and several of the most lively and traditional places to have a drink and tapas.

Crossing the isthmus people will arrive at the west of A Coruña peninsula where are the sandy beaches of Riazor and Orzan which are washed by the Atlantic Ocean. Being a popular tourist destination, A Coruña has a wide range of sport activities from diving, surf, sailing, windsurf, fishing to multiple activities for all the family. The large and clean beaches and seafood are the main attraction for tourists in A Coruña. By the way, it is said that in A Coruña often rains, However the rain does not last long. It is only a shower

Going on holiday to A Coruña is a unique experience of enjoying its fresh seafood and the famous tapas. Do not miss out tasting its traditional seafood. However, people should not leave A Coruña without spending some hours wandering about its city center, meeting people, having a drink, at the cafés or pubs, the city really comes alive during the night. 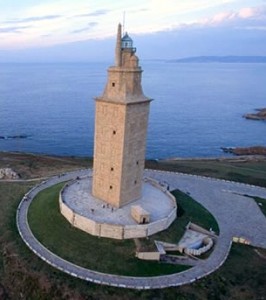 The lighthouse called the Tower of Hércules, which was built in the 2nd century when Trajan was Roman Emperor (53-117) and restored and covered in Neoclassical style in the 18th century, is the oldest Roman lighthouse in the world that is still working. Being the most remarkable building of A Coruña, the Hércules Tower is sited on a hill to 57 meters over sea level and about 49 meters in height, in a strategic point to the north of the A Coruña Peninsula by Artabro Gulf. Therefore, this lighthouse was declared a World Heritage site on the 27th June 2009 by UNESCO.

Nowadays, the Roman remains of the tower can be seen inside the lighthouse which were not covered during its restoration. Besides, if visitors have plenty of time, they will enjoy climbing the 232 steps to get the overlook from where they can see a breathtaking view of the city and surroundings. Before leaving this area visitors should take a look around, the Sculpture Park, an open air museum at the Tower of Hércules, the Wind Rose and the Aquarium Finisterrae are nearby.

The ticket to visit the Tower costs between 1,50 and 3 euros although on Mondays are free.

Today, its new Outer Port (Puerto Exterior) of A Coruña, which is a way of opportunities for the future of A Coruña, is being constructed on a strategic location in Punta Langosteira, Atlantic Ocean. It will give A Coruña opportunities for business and industrial investment. It is to 10 km. away from Coruña City to the west of A Coruña..

More places to visit near A Coruña (Galicia)

– Asturias and The Basque Country: Two of the greenest regions of the country. Besides, in there you will find some of the best gastronomy of the Iberian Peninsula.

– The best cities to visit in Spain: Looking for traveling to another city? Check here the most visited destinations of Spain.