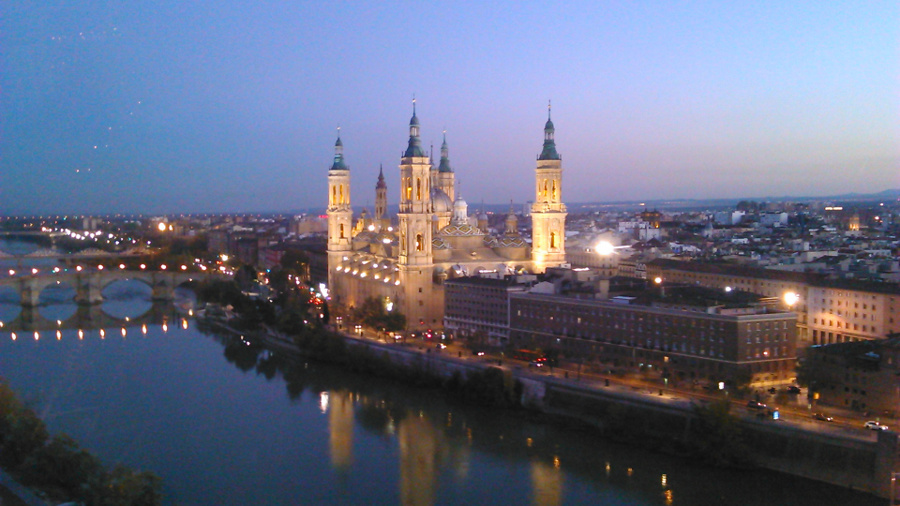 The Pilar Cathedral (also called Basilica del Pilar) is the most famous icon of Saragossa (Zaragoza).

This church is placed in the centre of the city at Pilar Square (Plaza del Pilar), near the Ebro river and in the same square than “La Seo” Cathedral. The current Pilar cathedral was built in the XVII century, based in earlier constructions.

Inside the temple, there is a statue of the Virgin Mary, called “Virgen del Pilar”. This religious image is so famous that during the celebrations of the city the tradition establish that people can give flowers to the virgin, in a ceremony in which participates a huge amount of citizens of Zaragoza and Aragón.

The Pilar Basilica-Cathedral in Zaragoza 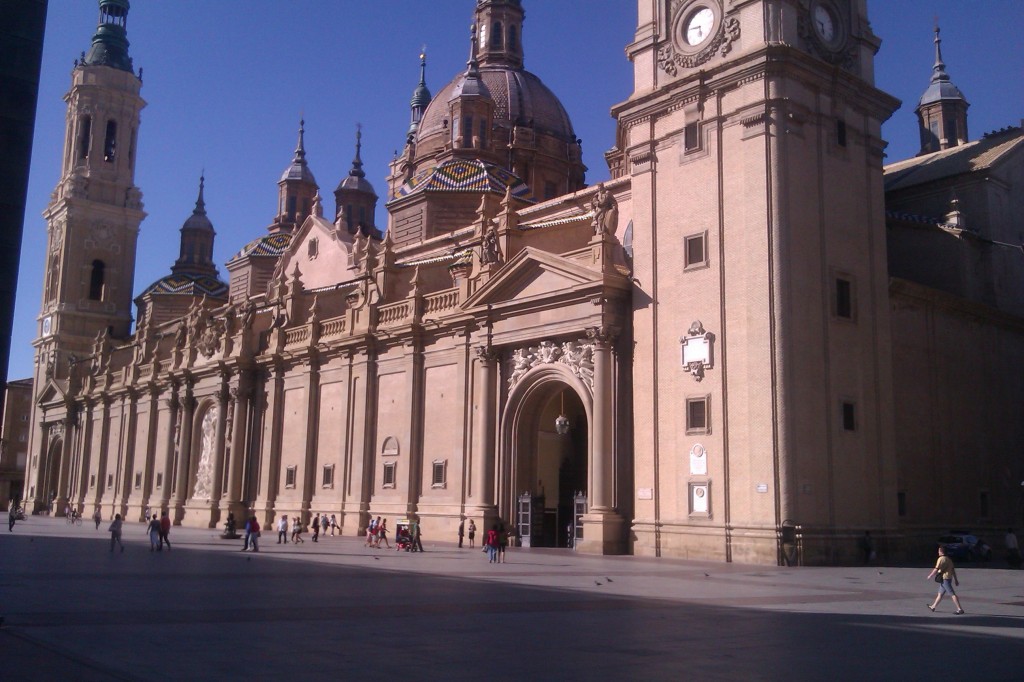 The Our Lady of the Pilar Basilica-Cathedral in Zaragoza popularly known as “The Pilar” (The Pillar) is the main attraction in Zaragoza city, it is not only a meeting point with the tourists and citizens because its beautiful building and its artworks but also its absolute devotion to the Virgin of the Pilar, so called because the image of the Virgin is on a pillar (columna).

The Baroque Basilica Cathedral of Our Lady of the Pilar has three 3 naves and is the second Cathedral in Zaragoza, (the first is the Gothic The Salvador Cathedral, also known as “La Seo” of five naves) both of them are situated in the Cathedrals square by the Ebro river, in the heart of Zaragoza city, so the Ebro City as is also known Zaragoza is the unique city in the world that has two cathedrals since 1675. 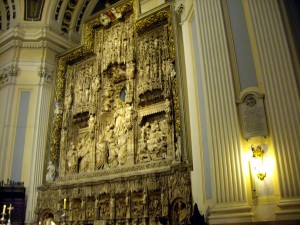 The current Baroque Basilica Cathedral building was begun its construction in 1680 on the site of the first chapel dedicated to the Virgin Mary. It is said that there had already been a Visigoth chapel in this place before constructing the Romanesque church when Alfonso I of Aragon known as the Batallador (1073-1134) reconquered Zaragoza on the 18th December 1118. Unfortunately, in 1434 the Romanesque temple was completely burnt down, and a beautiful Mudéjar Church was built on its ruins. Although this fine Mudéjar church was finished its construction in 1515 while Alonso of Aragon ( 1470-1520 son of the king Fernando II of Aragon 1452-1516) was the Archbishop of Zaragoza and it had important masterpieces, the Múdejar church was demolished to build a bigger one, it was the current Baroque Basilica Cathedral of Our Lady of the Pilar “ The Pilar” 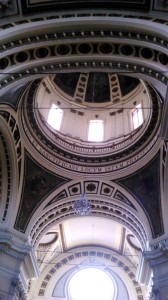 The Pilar of Zaragoza was finished its construction in 1872 except three of its four Baroque towers which were finished in 1907, 1959 and 1961 and each of them has a height of 92 metres. Measuring 130 metres in length and 76 metres in width, the building has a lot of masterpieces, some of them such as the impressive altarpiece in the main nave was sculpted in alabaster between 1509 and 1518 by Damián Forment; the remarkable choir-stalls of 124 seats in fine plateresque style dates about 1547, theses two masterpieces belonged to the previous Mudéjar church. Moreover, interesting paintings by Francisco de Goya y Lucientes (1746-1828), Francisco Bayeu Subías (1734-1795) and his brother Ramón Bayeu Subías (1746-1793), Antonio Gonzalez Velazquez (1723- 1794) among others can be seen inside. Obviously, the Pilar can not be missed during a visit to Zaragoza.

Inside the Basilica- Cathedal is the outstanding Holy Chapel where is venerated the Virgin of Pilar on the Sacred Columna by devout people, citizens and tourist. The Holy Chapel was designed and built masterfully by the architect Ventura Rodriguez ( 1717-1785) who managed not to change of place the Saint Column which had remained in the same place since the first temple built. By te way, under the Holy Chapel is the crypt where are the tombs of Saint Braulio (5th and 6th century), José Rebolledo de Palafox y Melci, known as the General Palafox (1776-1847 ) and other illustrious people. Tourists interested in visiting the crypt is open only on 2nd November every year. 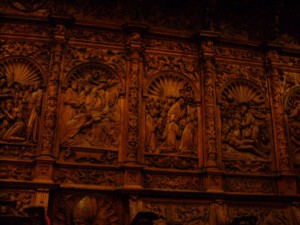 The Virgin of the Pilar is a wood carving of 36 cm. in height, being dated in the 15th century, therefore this Gothic sculpture is other masterpiece of the previous church like the Sacred Column which is of jasper and measures 170 cm. in height and 24 cm. in diameter. Around of the column the Virgin wears a different cape each day, although it is said that the Virgin has more capes than days has a years, in fact, it must be more than 400 different capes, many crowns and other many things, all of them have been donated by people from all over of the world and the offerings can be seen in the Pilarista museum. By the way, the Virgin does no wear capes the days on 2nd, 12th and 20th every month. 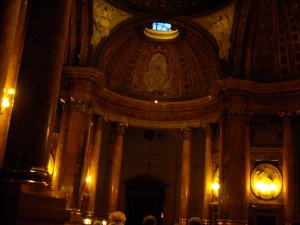 In conclusion, The Pilar is more than a cathedral, a temple or a basilica, it is a place of pilgrimage and of devotion to the Virgin. Do not leave the Basilica of the Pilar without passing by behind of the Holy Chaple, you will be able to touch the Sacred Columna. However, children can really touch the cape o the Column opposite the Virgin.

The Pilar Cathedral is open every day, and of course it is free to visit it and touch the Column. 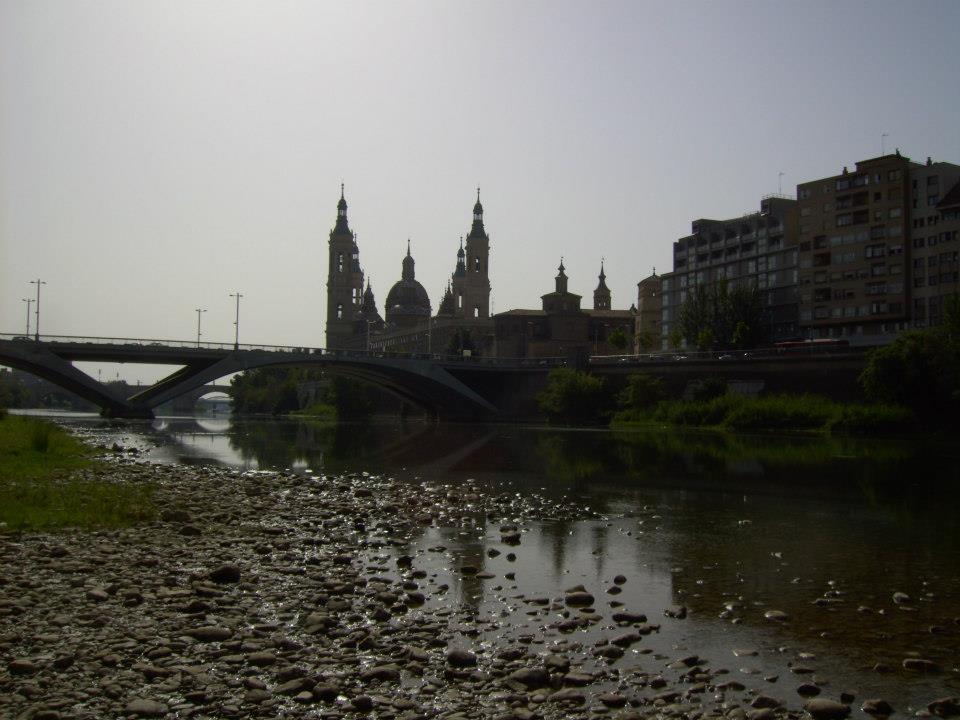 Pilar Square and surroundings: the Old Town of Zaragoza 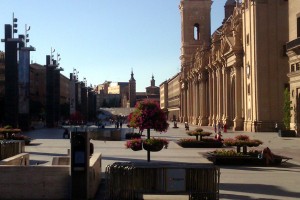 Here you have some ideas about what to do in Pilar Square (Plaza del Pilar):

– Pilar Square: Located in the very heart of Saragossa city and near the Ebro River, the spectacular Pilar Square is a site of significant historic heritage that is enjoyable and accessible by citizens and visitors.

– La Aljafería (The Aljafería Palace): A must for all tourists that arrive in Saragossa is to visit the stunning Aljaferia Palace, which is really the most visited historic site in Saragossa. This medieval Islamic palace was built by Muslims on the banks of the river Ebro in the 11th century.

– La Seo Cathedral: Salvador Cathedral (popularly, La Seo), in Zaragoza was declared a World of Heritage site by UNESCO as one of the most representative Mudéjar architecture of Aragón.

Read also More popular places in Zaragoza and The best cities and destinations of Spain.