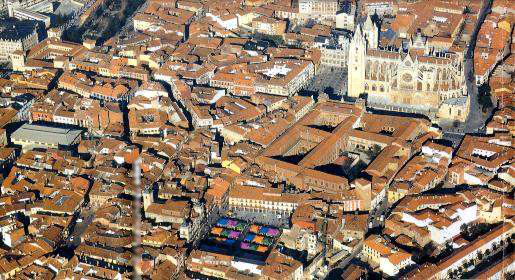 The city of León (which means Lion) is situated in the north-west of Spain, in Castile and Leon region, in a strategic place between the Bernesga and the Torío rivers which flow through the city just before its confluence.

Being one city about 140,000 inhabitants, Leon city has a lot to offer in cultural attractions, architecture, and entertainments, such as its Cathedral the most remarkable building of Leon; Roman Walls, Basilica of San Isidoro, San Marcos monastery, museums, traditional cuisine, restaurants, cafés, leisure areas, a medieval casco (medieval neighborhood) among other things. Besides, we cannot forget that Leon is a destination of the pilgrims who do the Saint James way before arriving in Santiago de Compostela.

León was founded as a wall camp called Legion in the first century before Christ by the Romans. Ten centuries later the king of Asturias y León Ordoño II (8??-924) chosen León as capital of his kingdom. However, in 1230 Fernando III king of Castilla y León (1199-1252) known as the Santo ( Saint) united both kingdoms of León and Castilla and Burgos was the capital of his kingdom.

The best way to explore the city is on foot, therefore, a enjoyable walk might start at the Regla square popularly known as the Cathedral square strolling through its surroundings the Cubos avenue (The Cubes), San Lorenzo and Cardenal Landazuri streets walkers can enjoy all facades of the Cathedral and Roman Walls also known as The Cubos which was constructed about the 3th century by the Romans and the Medieval Walls built in the 14th century.

The medieval casco (neighborhood) with most places within walking distance of center is the most popular area of León its pedestrian streets and squares such as the picturesque Santa María del Camino square also called Plaza del Grano is well worth a visit; The historic Plaza Mayor (the Main square) which impress visitors with its Edificio Mirador (Lookout Building) from 17th century, besides, the lively Plaza Mayor square is the best meeting point to make friends at the weekends and nightlife; Mariano Domingue de Berrueta, and the Ancha streets, the San Marcelo and the Conde Luna squares and surroundings plenty of restaurants, cafés, pubs, cafeterias and shops attract citizens and tourists. All of them take 5 minutes on foot from the Cathedral.

Basilica de San Isidoro (Saint Isidoro Basilica), which has 3 naves and was constructed in the 12th century, is regarded as one of the most important Romanesque churches in Spain . Its main and its south facades in Romanesque style, its altarpiece in the main chapel, its choir from 15th century. Tourists must not miss out on this Basilica which is located at 4 San Isidoro square to 5 minutes on foot from the Cathedral.

In the city center: the elegant Santo Domingo square is rounded by interesting buildings (the León Museum and the San Marcelo church); the Ordoño II avenue comes alive with shops, restaurants, cafés; in San Marcelo square visitors can see the amazing Casa Botines (Botines house) built about 1893 by the architect Antoni Gaudi i Cornet (1852 -1926). All of them take 5 minutes from the Cathedral.

Parador de San Marcos (Saint Marcos tourist hotel of 5 stars), which is located at 7 San Marcos square near Bernesga river, was built between 16th and 18th century in Gothic-Plateresque style and it is considered to be one of the longest Renaissance facade in Spain (it measures more than 87 meters in length), There are also a interesting archaeological museum and a beautiful Gothic church from 16th century. Visitors should not leave León without admiring this building. It takes 18 minutes on foot from the Cathedral. Moreover, there are also the MUSAC (the Art Leon y Castilla Museum), the Auditorio de Leon (Leon Concert Hall) and Building Europe in this modern neighborhood.

In addition, León has many parks with excellent facilities for sport and recreation, its riverside is the perfect place to spend the free time, By the way, other tourist attraction in León is that most people are used to going out eating its famous and delicious tapas, drinking some beer or wine and enjoying its friendly atmosphere every day. Tourists should not miss out Leon city when they visit Spain.

The Cathedral of Leon 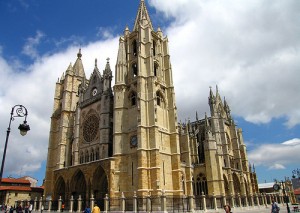 Saint Mary Cathedral was built on the site of a previous church between the 13th and 15th centuries in Gothic style, being really one of the most beautiful cathedrals in Spain and Europe it is considered to be a Gothic masterpiece. In fact, its more than 125 colorful stained glass windows and its three large stained glass rose windows are viewed as some of the finest stained glass windows in the world.

– Castile and Leon: Read the best places and cities to visit in this spanish region, as Salamanca or Segovia.

– The best cities to visit in Spain: Here you have a list with the most touristic cities of the country. 🙂 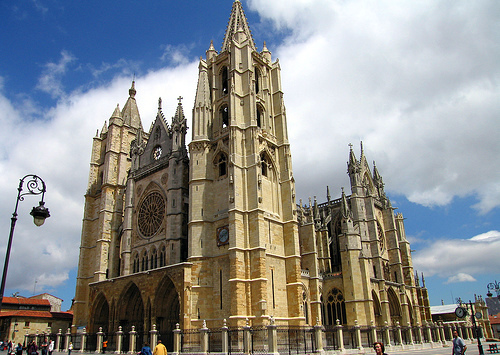 With around 140,000 inhabitants, León city (Castile and Leon region) has a lot to offer its visitors, such as its Cathedral the most remarkable building of Leon, The Roman Walls, Basilica of San Isidoro, San Marcos monastery, the Old Town, and many more.

The Cathedral of León has three facades, west, north and south; the west one is the most imposing facade with its three wonderful portals, two bell towers and one clock tower with its large stained glass rose window on the front of the facade. Moreover, inside the Leon Cathedral, which has three naves, interesting chapels, a stunning choir stalls from 15th century; a cloister (13th-15th centuries); a beautiful altarpiece from 15th century in the main chapel; the fine mausoleum of the king Ordoño II (13th-15th centuries), beautiful paintings, sculptures and artworks among others. Therefore, a must for tourists who arrive in León is to visit it. By the way, the local people must feel very proud to have this outstanding Cathedral.

On the other hand, if people are quite interested in religious art and culture, we suggest visiting the Diocesan Cathedral Museum, which is in itself worth a visit, has 17 rooms full of artworks, above all paintings and sculptures from the prehistory to the 20th century. Moreover, if tourists have plenty of time we recommend going upstairs to get the clerestory platform in order to enjoy the breathtaking view of the Cathedral, they will probability stay there for 30 minutes before going down the 64 stairs.

– What to visit in Leon city: A brief guide with the more visited places in the city.

– Castile and Leon: Read here the best places and cities to visit in this region, as Salamanca, Burgos, or Segovia.