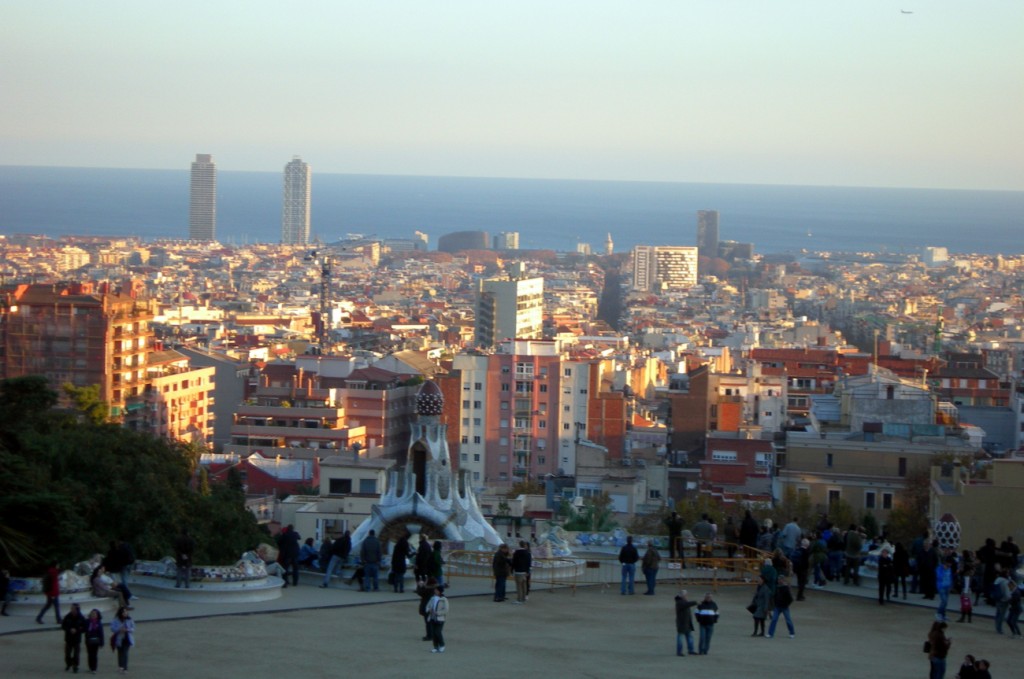 Barcelona is considered as one of the most vanguard and touristic cities in Spain (more than Madrid). But… why? Firstly, its location in the Mediterranean coast provides to the city a warm weather and a lot of beaches in the city and its surroundings. Also, it has many remarkable monuments as The Güell Park, The Holy Family Church, The Gothic Neighborhood, The Catalonian Music Palace and many more. The city has also been the headquarters of many important events as The 1992 Olimpic Games. Finally, maybe the best aspect of the city is its people: By visiting Barcelona you will discover a young multicultural atmosphere with a lot of activities and nigthlife in its beaches and streets, as in La Rambla avenue. 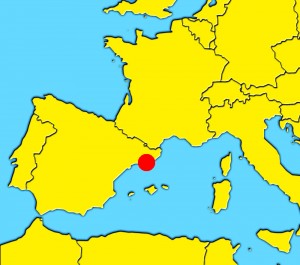 The city is placed in the north-east of the Iberian Peninsula, in the Catalonian region, Barcelona is a metropolis with around 1,500,000 habitants in the city and two million more in its surroundings. The official languages are the Catalonian and the Spanish, but most of people speak English pretty well.

Here we propose you a three-days tour to visit the most emblematic sites of Barcelona. Enjoy it!

– Las Ramblas Avenue: This is the most famous and visited avenue of the city where. There, people go to visit monuments, go shopping, rest and see the seaport. Las Ramblas street goes from Catalonia Square to Columbus Monument. To arrive at Las Ramblas by metro you can use the Line 3 (Liceu)  or  Lines 3, 6 and 7 to Catalunya Square. 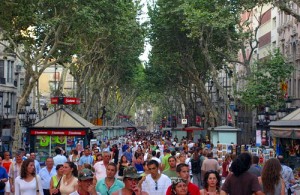 – The Gothic Neighborhood: The Gothic neighborhood is alongside La Rambla street. It is one of the essential places that every visitor should see. In there, you will enjoy the traditional streets, monuments, churches… 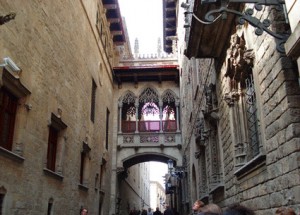 – The Barcelona Cathedral: The Barcelona main cathedral is located in la Seu Square (Gothic neighborhood). It was built between XIII and XV centuries. 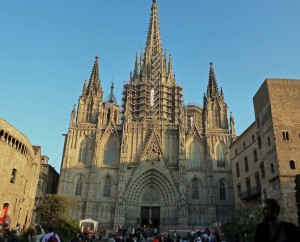 – San Jaume Square: In this square you will find the City Council and San Jaime Church.

– La boqueria market: This food market is placed in one side of Las Ramblas avenue. It’s a very popular place to eat something. 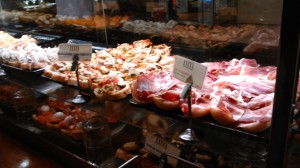 – Waxworks: Also located close to Las Ramblas (Banca Street , 7), the wax museum (Museo de cera) is one of the most visited museums of this type in Spain.

– Maritime Museum: It is located in Drassanes Avenue. This museum has a lot of staff about boats, galleys, etc. It can be interesting if you want to know more of the history of the navigation.

– Columbus Monument: This famous Columbus statue (Estatua de Colón) is in the Plaza de la Paz (between Las Ramblas and he seaport). Columbus monument measures 60 metres in height, and it is made of iron and bronze. 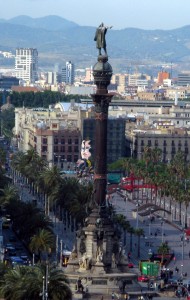 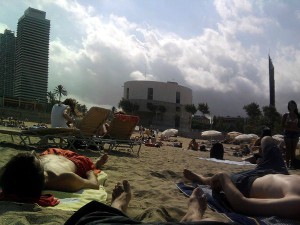 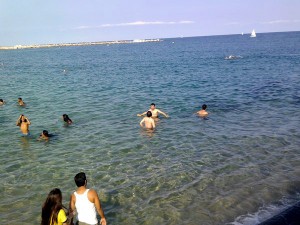 Nigthlife in Barcelona: During evening and night, Las Ramblas zone also has a lot of activity in its bars, restaurants and pubs. In summer, there is nightlife there almost everyday.

Day 2: The Holy Family, The Güell Park and other remarkable monuments

In the second day of our trip we are going to discover the main monuments of Barcelona. Here you have a list with them, please feel free to visit the sites in the order you prefer:

– The Church of the Holy Family: The Holy Family (La Sagrada Familia) is one of the most beautiful buildings the city. Its construction began in 1882 and it’s not finished yet. Antoni Gaudí Architect designed and directed the building from 1883 until his death in 1926. In fact, The Sagrada Familia is the masterwork of Antonio Gaudí, who was buried in the crypt of this church. The Holy Family was declared World Heritage Site by UNESCO in 2005. 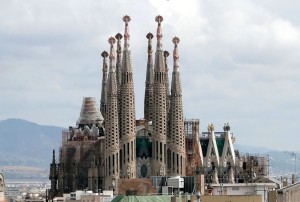 – The Güell Park: The Güell Park (Parque Güell) was also designed by Antoni Gaudí, being constructed between 1900 and 1914. People who visit the park can enjoy strolling in its area, sitting down on its decorated benches or admiring its architecture. If visitors touch its sculptures, they will realize the experience of feeling the shapes and the colorful of its artwork, such as the dragon, the 86 columns, the benches, the stairway, so on. The park was included as World Heritage Site in 1984.

– Casa Milà: Popularly known as La Pedrera, Casa Mila is a unique modernist building located at Paseo de Gracia. The building was designed by architect Antoni Gaudí and built between 1906 and 1912. In 1984, Casa Mila was declared a World Heritage by UNESCO. To read the whole history of this bulging, check our article here. 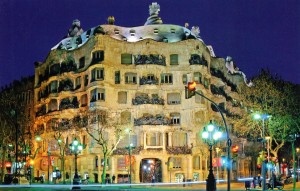 – The Catalonian Music Palace: Palau de la Música Catalana, known as Palau,  is an impressive hall concert, located in the center city. This building is one of the most visited places in Barcelona by people who want to enjoy its Modernism architecture or listen to its concerts. It is located near the Gothic Cathedral, and to 10 minutes on foot from Catalonia Square. The Catalonian Musica Palace was was declared World Heritage Site in 1997. 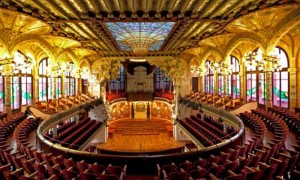 In the third day we will see other touristic places of the city not as famous as the previous ones, but with have a difference among citizens and visitors:

– Montjuic and Tibidabo zones: From these view points people can enjoy the view of Barcelona. 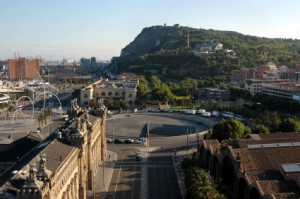 –  The Magic Montjuic Fountain: One of the  most  beautiful fountains in the world  is  the  Magic Montjuic Fountain (Fuente mágina de Montjuic) which offers an outstanding performance of colorful  light, music and water. It was built in  1929  for Universal Exhibition of Barcelona, and was designed by the Catalonian engineer Carlos Buigas (1898- 1979). The Magic Fountain is located  at the Queen Maria Cristina Avenue in front of the  Montjuict Palace. It is worth a visit. 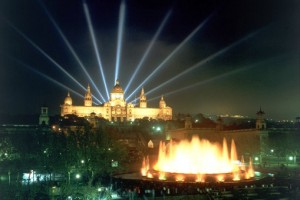 – Agbar Tower: Torre Agbar measures 145 metres in height, the third higher building of Barcelona. It is located at Diagonal Avenue. Although it was built recently, its colorful surface , its shape and its visibility from many points of the city have favored its fame among the people as a new icon of the city. 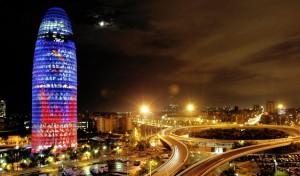 – Camp Nou: This is a must for all the FC Barcelona football team supporters. This football stadium has a museum inside it and it’s located near Zona Universitaria (Metro Line 3) and Pedralbes Park (Palau Real Metro station).

Please, if you notice any other important place of Barcelona missing, add it in the comments section of this post or send us and email!

More places to visit near Barcelona

– Salou: Salou is one of the summer-touristic-towns places in the Mediterranean coast.

– Sitges: Sitges is also known for its Sitges International Fantastic Film Festival of Catalonia, the Barcelona-Sitges Vintage Car Rallys and its Carnival Celebration.

– Castelldefels: Castelldefels is located on the Mediterranean Sea coast of Catalonia,  just to 18 km away from Barcelona city.

– La Pineda: With only 3,000 inhabitants, La Pineda (Vila-Seca) is a small town located in the north-east of the Iberian Peninsula, at Tarragona Province.

– Valencia: Bordering the meditterranean coast from Barcelona to the south of the country, you will find this city. In Valencia you can visit places as La Ciudad de las Artes y las Ciencias or La Lonja.

– Zaragoza: Zaragoza is a big city located among Barcelona and Madrid. The perfect place to rest one or two days while visiting the city.

– Madrid: The capital city of Spain. Don’t miss it!