The Palau de la Música Catalana (The Catalonian Music Palace, or The Palace of Catalan Music), known as the Palau,  is a hall concert, located in Barcelona city. This building is one of the most visited places in Barcelona by people who want to enjoy its Modernism architecture or listen to the choir of the Orfeó Catalá (Catalonian Choral Society) or concerts.

Located in the heart of Barcelona city near the Gothic Cathedral, and to 10 minutes on foot from the popular Catalonia square (plaza de Cataluña), this modernist building was declared a World Heritage site in 1997 by UNESCO.

History of the The Catalonian Music Palace 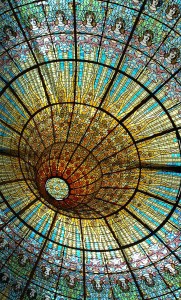 The Palau de la Música Catalana was constructed between 1905 and 1909 by the Catalonian Modernist architect Lluís Domenech i Montaner (1850-1923), who made an agreement with the best artists, sculptors and painters such as the architect Jeroni Granell i Manresa (1867-1931) who made many of the colorful stained glass windows and dome of the palace; the world renowned Aragonese sculptor Pablo Gargallo (Maella -Zaragoza 1881- 1934) who sculpted the colossal figures of the proscenium; Lluís Bru i Salelles ( 1868-1952) and Mario Maragliano who worked in the fine mosaics, among other artists, so that all of them worked on the project of a building for the Catalonian Orfeó Headquarter (sede del Orfeó Catalá).

Having a seating capacity of more than 2.000, the Palau has a main outstanding Concert Hall (Sala de Conciertos) with a large organ over its stage; the Rehearsal Hall of the Orfeó Catalá which is below the main Concert Hall; the stunning Hall Lluís Millet among other things.

Nowadays, the Palau de la Música Catalá has a lot of performances during the year, so that all people can see the impressive Palau which is considered to be a Catalan Modernism masterpiece. However, if people do not have free time to attend any concert, they can take a guided visit in the morning, or perhaps take a stroll around its streets and seeing its wonderful facades (at number 7 San Pere Mes Alt street and 4 Amadeu Vives street). Moreover, there are a restaurant and cafés inside the Palau building. 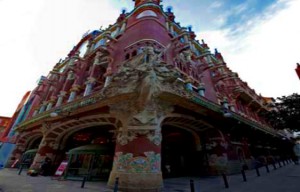 Being Barcelona the second largest city in Spain (the first is Madrid) has a lot of interesting places, buildings, activities, entertainments to offer visitors in the way of spending an unforgettable holiday. However, if people attend some of the concerts at the Palau, they will have an enjoyable experience. Do not leave Barcelona without visiting the Palau.

– Las Ramblas Avenue: La Rambla Avenue goes from Catalonia Square to the seaport, and it has a lot of cafes, terraces, pubs and discotheques. In the end of the street, there is the Cristobal Colon monument.

– Columbus Monument: One of the most famous statues of Barcelona city. It was built in 1888 for a Universal Exposition and it represents a statue of Christopher Columbus above a pillar, pointing with his right hand to the sea.

– The Holy Family (La Sagrada Familia): It is a must for tourists that arrive in Barcelona see its outstanding architecture, design and sculptures.

– La Barceloneta: In summer, you can sunbathe or swim in the beach of La Barceloneta, which is 5 minutes walking from Columbus Monument.

Read also our post with the most famous monuments in Spain.