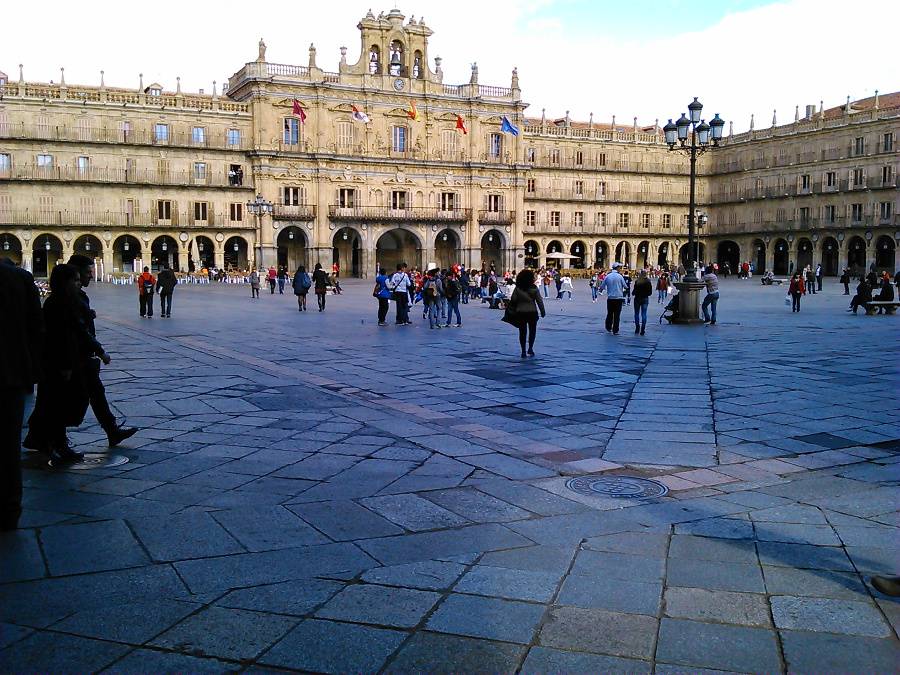 The Main Square (Plaza Mayor) of Salamanca is the hearth of the city. This square is located in the Old Town of Salamanca and it’s surrounded by the most important buildings of the town, as The University faculties, The Shells House (Casa de las Conchas) or The Cathedral.

Salamanca is one of the best maintained traditional cities of Spain. The Old Town of Salamanca is highly popular for its elegant stone-made buildings, monuments and squares.

The Main Square of Salamanca 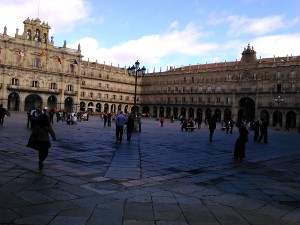 Salamanca Main Square is one of the icons of the city. It was built from 1729 to 1756 by architect Alberto Churriguera. The square has a rectangular shape bordered by elegant stone-made Baroque buildings.

The main facade of the square is the Hall Town of Salamanca. Starting from this point and bordering the square, there is a beam corridor in where are medallions which have sculpted the faces of some important people of the last centuries: The kings of Spain (Carlos I, Felipe II…), conquerors (as Cristobal Colón or Hernán Cortés), or writers (Cervantes, Miguel de Unamuno…).

Although in the beginnings of the 20th century the Main Square has gardens in it. Nowadays it has been remodeled to leave more free space. However the square has benches and terraces for the people who want to rest or have a lunch.

Restaurants and bars in Salamanca near Plaza Mayor

To eat and drink in the Old Town of Salamanca is a pleasure: The bars and restaurants are merged with the traditional environment of the town, which will lead you into a medieval atmosphere in were Salamanca was one of the main cities of Spain.

The most visited bars and restaurants of Salamanca are placed in Plaza Mayor and its surroundings. Also, there are many pubs and discotheques in the area for young people.

Take into account that, as Plaza Mayor of Salamanca is the heart of the city, people are used to dating there with their friends to spend the free time in this zone. As a curiosity, it is said that the prices of the bars are cheaper than in other bigger cities of the country as Madrid. 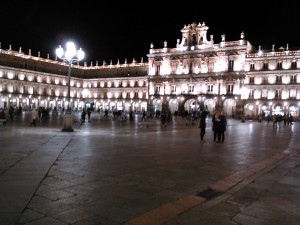 Salamanca is a high popular destination for young people. As it has the oldest university of Spain, many students (both Spaniards and Erasmus) live there during their studies. That means that, during the academic course, there are always a lot of activities for students and visitors.

The main bars and discotheques of Salamanca are placed in the Old Town, near the University buildings. In there, there is a lot of night life almost every day, from September to June (during the academic year).

– What to visit in Salamanca: Check here our article with the top buildings and monuments of Salamanca.

– Castile and Leon (Castilla y León): By visiting Castile and Leon you will be in some of the most ancient cities of the centre of the Iberian Peninsula: Salamanca, Burgos, Segovia, Avila and more.

– The best cities to visit in Spain: A list with the most touristic cities and destinations of Spain.