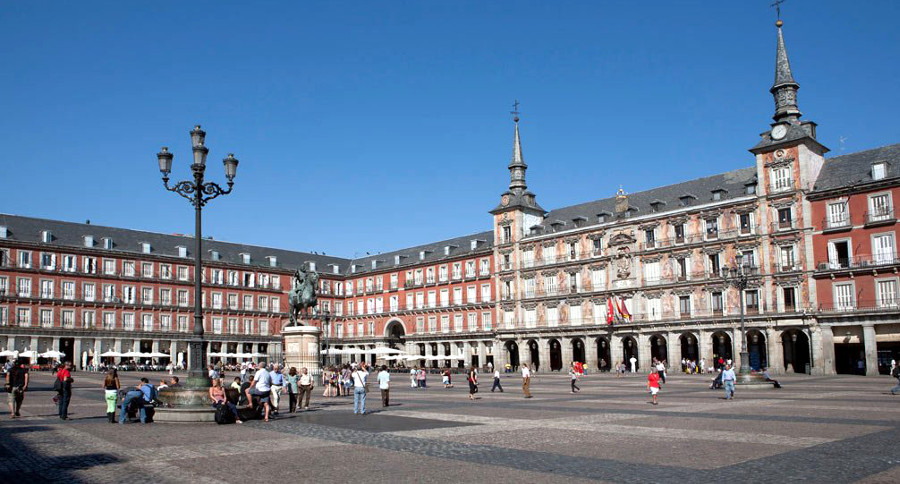 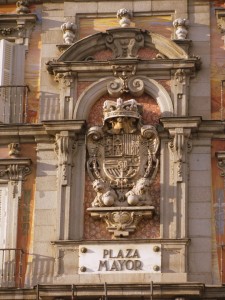 adrid’s Main Square is situated in the center of the city, five minutes from Plaza del Sol, and in comparison to Plaza del Sol it is much more calm and quited.

The Main Square was built around 400 years ago. It is surrounded by charming three-storey buildings, painted mostly in red, with beautiful windows. It was built when Madrid became a capital city of Spain. Before this, the Main Square was used as a market with vegetables and fruits. The construction started in 1617 and was finished 2 years later.

It was the place of bull fightings, theatrical plays, knights’ tournaments or executions. Now it is a place full of restaurants and pubs. It is more popular among rather tourists and street performers than Spaniards. Every Sunday you can buy there some paintings, admire great collections of coins or find some interesting thing to buy.

– Puerta del Sol: Puerta del Sol (which means “Sun Door”) is the name of the most famous square in Madrid. This emblematic place is one of the reference points more used in the city, and many citizens are used to dating with other people from this point.

– San Miguel Market: Inside of this famous market you will find an incredibly variety of food: juices, “tapas”, “croquetas”, hamburgers, fruit, fish… all of this of the highest quality.

– Gran Via: The most famous avenue of Madrid. It has a lot of theaters, coffee and ice cream shops. You can arrive there in 3 minutes from Puerta del Sol going on foot.

– Opera Square: You will find there the Opera Theater.

– Palacio Real and Almudena’s Cathedral: Two of the most viewed buildings of Madrid. Both of them are placed together and they are 5 minutes on foot from Plaza Mayor.

– Fuencarral Street: You can go there going through Montera Street. Fuencarral is straight on, just after passing Gran Via. Fuencarral is well known because it has a lot of shops and because it’s placed between Malasaña and Chueca, which are two of the most famous neighborhoods of the Madrid.