Sierra Nevada is a mountain massif located in the south of Spain, more specifically in Andalusia, between Almeria and Granada.

In there, there is located The National Park of Sierra Nevada and the Sierra Nevada Ski station. These two places offer a lot of activities for the people who visit it, from skiing and snowboarding in winter, to hiking, to make excursions, cycling or para-gliding the whole year.

The National Park of Sierra Nevada

Inside the mountain massif it’s placed the National Park of Sierra Nevada (Parque nacional de Sierra Nevada). Declared a national park in year 1999, it covers an area bigger than 85000 hectares.

The park has more than twenty peaks over 3000 meters high. From all of them, Mulhacen is the highest peak, with 3480 meters high.

The Ski Station of Sierra Nevada 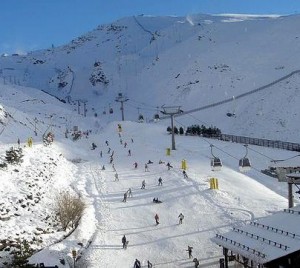 (Sierra Nevada, Estación de Esquí y Montaña de Andalucía) is the highest ski station of Spain and one of the biggest ones (only comparable with The Pyrenees, in Catalonia, Aragon and Navarra). Besides, its location in the south of the country, near the sea, creates a softer weather and its height propitiates to have  high quality snow.

Every winter thousands of people from the south and the center of Spain, and also from outside, go skiing and snowboarding. One day skiing can cost from 40 to 65€ per person (depending if you have your own equipment, if you park the car in a parking or if you want to eat in its restaurants).

To arrive at the Sierra Nevada ski station, you can go by bus or by car from Granada city. The station is 31 away of the city. Another option is to take a bus (called Bus Blanco) from Madrid.

Here you have a map of the Ski Station: 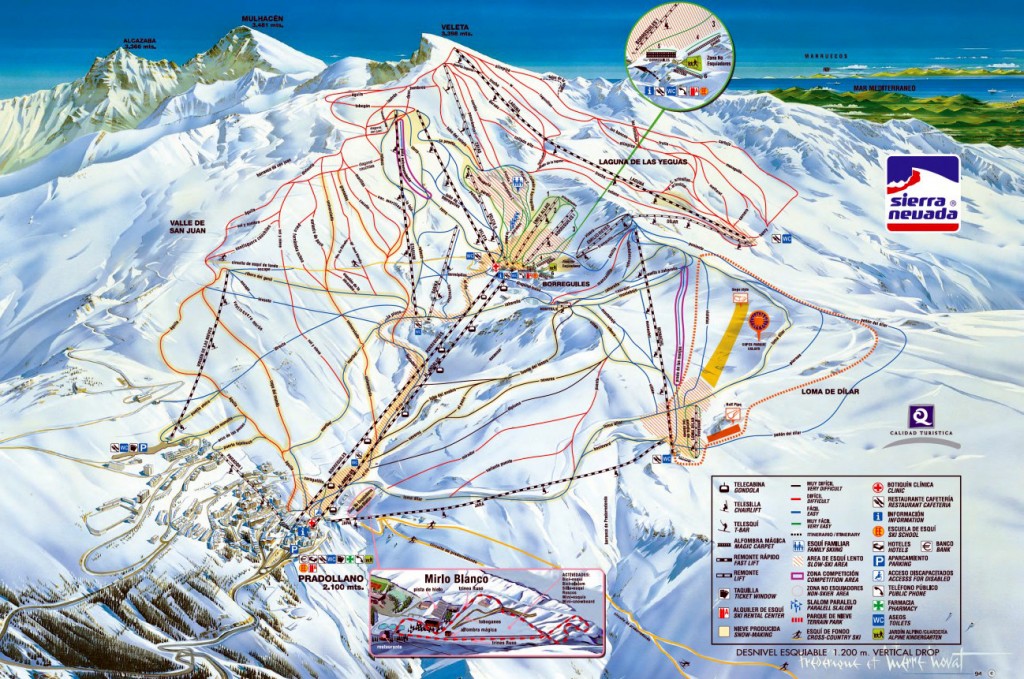 The main entrance is at Pradollano (2100 meters), then a chairlift will you take you to Borreguiles. The highest ski tracks of the station are placed at Veleta peak (3400 meters).

– La Alhambra (Granada): It is said that “There is nothing sadder in the world than being blind in Granada,” because one blind cannot see the wonderful sunset staring at the Alhambra from the Albaicín, and enjoy its extraordinary architecture, therefore, a must for tourists who visit Spain is to spend several days in Granada and visit The Alhambra which is one of the most visited monuments in Spain.