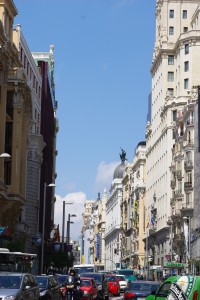 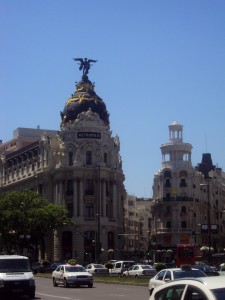 Gran Via is one of the most famous streets of Spanish capital. It is situated in the center of Madrid and was built 100 years ago. The idea of the street was to join and improve the communication between the districts of the capital city.

The construction took almost 50 years and was realized in 3 parts. The street begins at the end of Calle Alcala and ends
at the Spanish Square. It’s a very busy place, full of cars and buses 24 hours per day. It is a quite long street, full of beautiful buildings which now are museums, hotels or expensive restaurants. 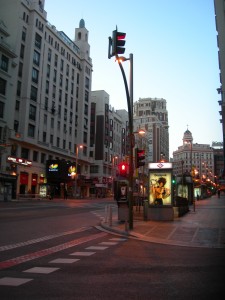 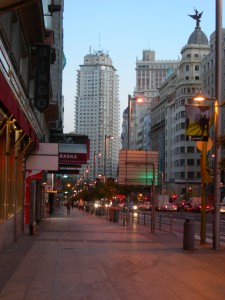 You can also find there some popular pubs, bars with tapas, cafeterias, hostels, theaters and cinemas. On Friday’s afternoon it’s very difficult to pass through it, because many people want to begin their weekend there. It is very easy to get there with metro. There are four metro lines which stop in different parts of this street. It is also very close to Puerta del Sol and Plaza de Cibeles – one of the most popular Madrid’s landmarks.

What to visit near Gran Via (Madrid)

– Cibeles: In Cibeles Square you will see the famous Cibeles fountain and some important buildings, like Cibeles Palace (Palacio de Comunicaciones), the headquarters of the Madrid city council.

– Fuencarral Street:  Fuencarral is well known because it has a lot of shops and because it’s placed between Malasaña and Chueca, which are two of the most famous neighborhoods of the Madrid.

– Plaza de España: Another popular square, in where you can find the first skyscrapers of the city, and a beautiful fountain in the middle of the square with a statue of Don Quijote and Sancho Panza.

– Plaza Mayor: In this traditional square there is a Felipe II statue rounded of white ancient buildings. The young people in the city are used to going to this square to eat squid sandwiches. Moreover, some politicians told once about taking a coffee in there… but from our point of view, there are a lot of better -and cheaper- places in Madrid places to do it).

– Opera Square: You will find there the Opera Theater.

– Palacio Real and Almudena’s Cathedral: We will talk about these monuments in another article. It’s 10 minutes walking from Puerta del Sol.