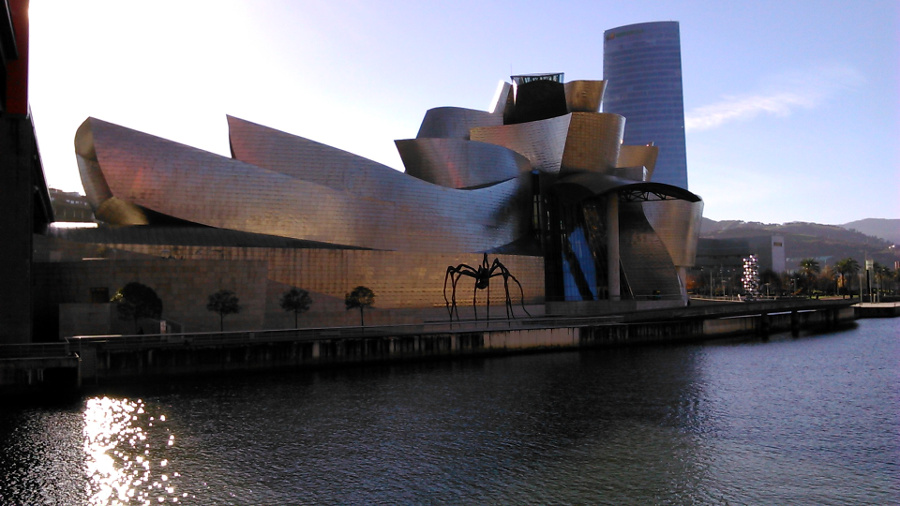 The Guggenheim Museum (Museo Guggenheim) is a contemporary art center placed in Bilbao, in the Basque Country. The museum was inaugurated in 1997 and since then, it has become one of the most popular museums of Spain and Europe because its original and transgressive design. 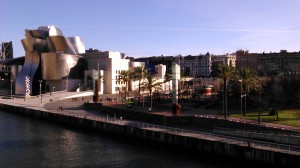 many characteristics that makes it unique: Its structure, designed by the architect Frank Gehry has a curved surface covered in titanium. What’s more, its situation, close to the river bank, creates a wonderful game of highlights when the sun reflects its rays in the titanium and then they are reflected in the water.

The surroundings of the museum

The Guggenheim Museum is located in the estuary bank of the Nervion River, at Bilbao city center. Around it, you will find some famous sculptures, a tourism center and green zones. Moreover, there are other relevant buildings of Bilbao near the museum: The University of Deusto, Doña Casilda Park, The Princes Bridge, Iberdrola Skyscraper and more.

To arrive at Guggenheim, you can go on foot from the train station (10 minutes) or from the bus station (6 minutes). You can also go by tram.

Another option to arrive at 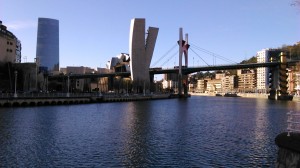 the museum is to go from the train station in the historic centre of Bilbao, bordering the river until arrive at the museum. Surely, doing this you will take the nicest photos of Bilbao.

More places to visit in Bilbao

– The Old Town of Bilbao:  This is a zone of ancient buildings, narrow streets and squares in the centre of Bilbao. This zone is popular among citizens and tourists because its gastronomy, atmosphere and for its churches and traditional buildings.

– Getxo (Guecho): Getxo is a town of 80.000 inhabitants located 30 minutes away from Bilbao city. The situation of the town in the Nervion river mouth, its beaches, its maritime port and its landscape, have become it one of the most touristic places of the region in the last century.

Other popular museums in Spain

– Reina Sofía Art Center (Madrid): This art gallery forms part of the “Madrid’s triangle”, next to Prado Museum and Museum of Thyseen-Bornemisza. These three art galleries are must-see places in Madrid. Each of them is full of masterpieces of art. This museum is dedicated to the modern art, mostly of the 20th century.

Read also our article about the best destinations to visit in Spain.