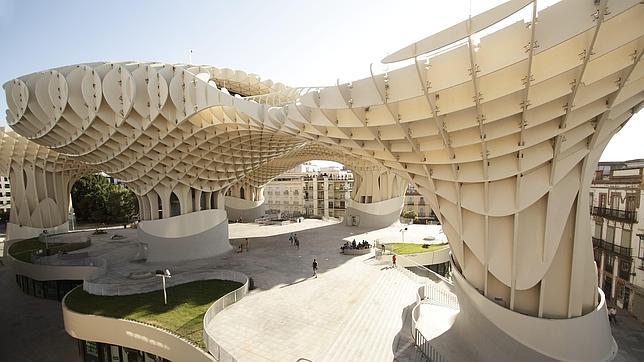 Metropol Parasol is the official name of this construction placed in Plaza de la Encarnación, near the city centre of Sevilla. Popularly, the structure is known as “Setas de la Encarnación” because of its similarity to a big-scale mushrooms.

The construction consists in a group of six wooden structures (mushrooms) which covers the square. Inside it, there are some different levels in where you can find a roman museum (Antiquarium), a market and two terraces. Also, all of this is surrounded by restaurants, benches and other places to rest and to enjoy the square.
Metropol Parasol was finished in 2011 and cost 86 million euros. It has received a lot of complaints about its expensive price and because its architecture doesn’t fit with the traditional buildings of the area. However, to visit the mushrooms is a unique experience.

If you have the opportunity to visit Seville and you have enough time, our recommendation is to visit this place and to dinner in the square. Surely, you will feel the sensation of being a smurf in the middle of an urban jungle 🙂

What to do in Metropol Parasol (Seville)

– To go to the terrace of the upper levels and see the whole city.

– To have a lunch in the restaurants of the area.

– To visit the museum in the underground level of Metropol Parasol.

– If you are young, to go party in the pubs and discothèques that you can find near the square (at 5 minutes on foot).

More places to visit in Seville

– Plaza de España: It is located in the middle of Maria Luisa Park, in the city center. The square has a fountain in the middle, rounded for a small lake and a building behind it that gives a traditional style to all the place.

– Archeological Museum and Arts Museum of Seville: Both of them are placed in Maria Luisa Park.