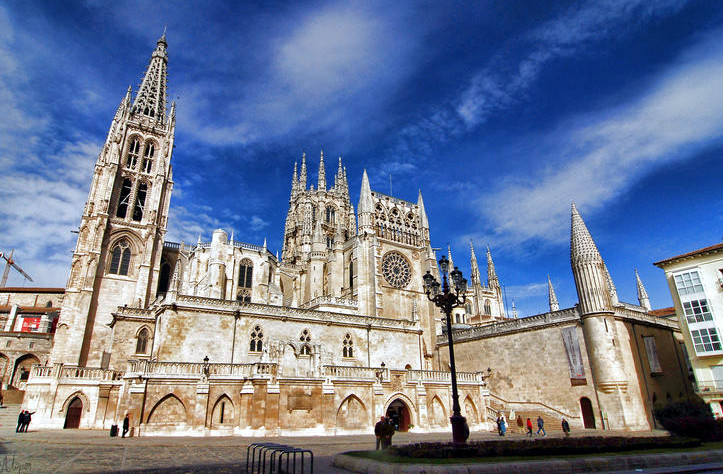 Burgos city has 180,000 inhabitants and is situated in the north of Spain. The Saint Mary Cathedral in Burgos, (Catedral de Santa María de Burgos), popularly known as The Burgos Cathedral is the most remarkable building in Burgos and one of most beautiful Gothic Cathedral in Spain, which has been a UNESCO World Heritage site since 1984.

History of the cathedral 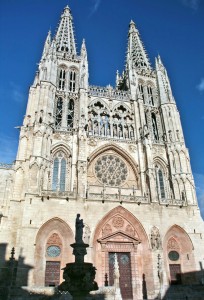 The colossal Burgos Cathedral was begun its construction in 1221 by the King Fernando III of Castilla, known as The Saint (1199-1252), and the Bishop of Burgos Don Mauricio and was finished its construction in 18th century. The current Cathedral was built on the site of a Romanesque church which had been demolished in order to build a temple bigger. In fact, the Cathedral has 3 naves, 19 interesting chapels, one of the best Gothic cloister in Spain which is dated in the 14th century and decorated with sculptures of the 13th and 14th centuries among other things.

As this cathedral has more than enough artworks to see in a visit, one option is to stroll along the streets bordering the Cathedral admiring its architecture. If visitors start their walk in Saint Mary square they can see the impressive main facade in Gothic style with its two outstanding towers which have 84 metres in height and were finished by Juan de Colonía (1410-1481), in the best Flamboyant Gothic style, the great stained glass rose window and its three gates. On the left, people can go upstairs to get Fernán González street in where they will find the fine Gothic Coronería or the Apostles gate. Continuing straight and turning on the right they can stare the Pellejería gate which was built in 1516 by Francisco de Colonía. Finally, taking Paloma street, walkers will arrive at the King Saint Fernando square where is the Gothic Sarmental gate built in the 13th century with the finest sculptures, it is really the more beautiful gate of the Cathedral and the original stained glass window on its facade; and turning on the right, strollers will see the Saint Mary square again. Do not leave without staring the Gothic Sarmental gate.

Visiting the cathedral of Burgos 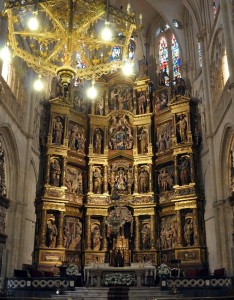 Inside the Cathedral of Burgos, visitors can not miss out the unbelievable dome dates in the 16 century; in the central nave is the main altarpiece (16th century) which is considered to be one of the best altarpiece in Spain; the beautiful choir; the golden staircase from 16th century; the famous Papamoscas from 16th century (a strange figure doll on a clock that opens its mouth once a hour); the tomb of Rodrigo Díaz de Vivar, known as El Cid Campeador (1044-1099) and his wife Jimena; the Flamboyant Gothic Condestable chapel which is a masterpiece by Simon de Colonia (1450-1511) from the 15th century and its stained glass window; the Saint Tecla chapel (18th century), and many more artworks.

People interested in attending Mass should go to the Saint Tecla chapel from 8,30 to 13,30 and 16 to 20, it will be closed for tourists.

The Cathedral is open for tourists from 10 a.m. to 7 p.m. ( from 10 to 19). A ticket costs from 1,50 to 7 euros. Visitors must remember that Burgos Cathedral is an important point in the Way of Saint James’ pilgrims. 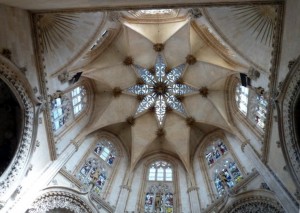 Moreover, before entering or after going out the Cathedral, tourists can enjoy the visit more if they take a look around the King Saint Fernando square to see the pilgrim statue and the noteworthy the Saint Mary arch which is opposite to the Cathedral and was one of the walls’ gates to enter the city in the medieval times. By the way, there are several cafes, restaurants, shops in this square.

Other interesting buildings to visit in Burgos, near the cathedral

The Saint Mary square is a starting point to get other interesting buildings in Burgos easily, for example, the Burgos Castle takes about 10 minutes on foot, it is the perfect place to take photographs and people can see the breathtaking view of the Cathedral and surroundings; the outstanding Saint Mary of the Huelgas Monastery (Monasterio de Santa María de las Huelgas) dated in the 12th century takes about 30 minutes on foot, tourists should not leave Burgos without visiting it.

Finally, Saint Nicholas church (Iglesia de San Nicolas) from the 15th century with an alabaster altarpiece worth a visit to 5 minutes from the square.

– Top cities and destinations in Spain: What to see in Spain?  If you are thinking of visiting Spain but you don’t know exactly what are the best cities to see, this post is for you.